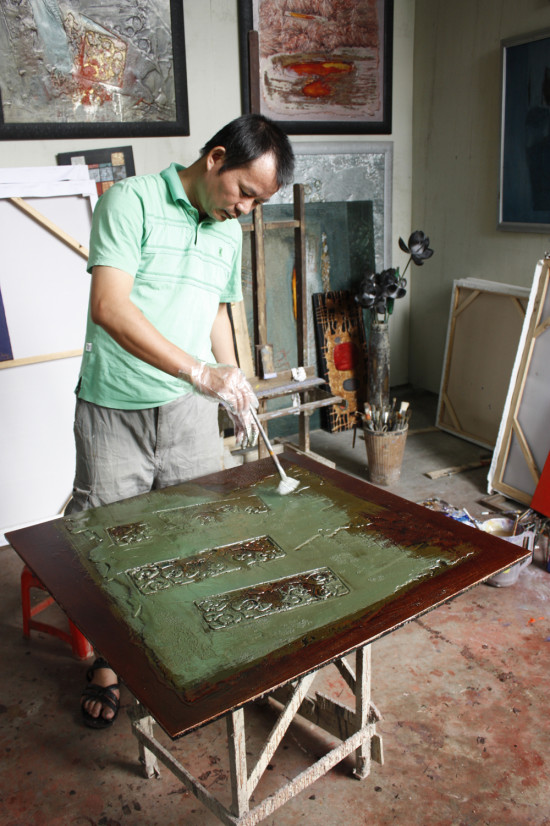 At present, Vietnamese artistic lacquer work are highly considered by European and American people. Collecting lacquer painting and other lacquer works has become a prevailing vogue; this is similar to the interest in ancient chinaware of  European kings and aristocrats many centuries ago.

The mystery of gold and silver embedded beneath the red – brow coat of lacquer, new techniques, and the endurance of the lacquer are said to be what allure the sense for art of people.

For the time being, lacquer products are chosen as diplomatic gifts. In the last ten years, Vietnamese lacquer products have always been complimented in annual international exhibitions organized in Germany, France, The United States

Below are some remarkable points about the development progress of Vietnamese lacquer existed in Vietnamese fine arts long time ago.

- Lacquer were used for decoration in ancient brass, metal items, and other terra cotta pottery excava ted from ancient graves in the North.

- Some documents of Bezacier, officer of the Far East Archaeological school, reported that not only stone tower of Cao Bien (866 – 870 A.D) but also remnants of broken i jars, pots belonging to jar – skin set (Greis) being found were decorated with black and red lacquer through an archaeological excavation in Phat Tich pagoda in 1943.

- Some ancient archaeological items excavated in the area of Phu Tho horse – race course like Emperor’s seal box, sword hilt were decorated with gilding lacquer.

In brief, lacquer really came in to being centuries ago. Some hypothesis assumed that our lacquer originated from China, others supposed that it was introduced to the country by Japanese. So far, there have been no concrete evidence for the aforesaid hypotheses.  Some latest historical facts indicarte that under the reign of Le Nhan Tong (1443 – A.D), Tran Thuong Can the founder of lacquer from Ha Dong  province – studied some new techniques from the Chinese ( paint and pottery artisans living in the end of Zhong dynasty but came to settle in North  Vietnam to escape from Mongolian invaders). He earned his living from the career and trained many skilled artisans. Then he was summoned to carry out the conservation of palaces temples and tombs.  He was also conferred Dukehood by the Emperor. When he died, village people adorde him as a deity. His tomb was built in Binh Vong village, Thuong Tin district, Ha Dong province (Annually lacquer artisans commemorate his death anniversary the 13th of June in Lunar calendar as the Profession Day).

Since then, the lacquer has been vigorously developed through the Dynasties from Le to Nguyen (16th to 20th century). Like other handicrafts in Vietnam, lacquer  artisans gatherred to from profession association. All artisans of every industry practise profession in clusters on the same for mother – of pearl laying, Hang Trong  street for embroidery, Hang Hom street for carpentry, and Hang Gai street for lacque, etc.  Lacquer makers strictly followed their own techniques and styles, which were handed  out paintings were inherited. That’s to this, national aesthetical values of paintings were inherited. That convervative concept, however, undoubtedly hampered the development of fine arts.

Until 1925, when Indochina Fine Arts College was founded in Ha Noi, Vietnamese lacquer really opened  a new era for the national fine arts. From that time, a new typical from aesthetical creation appeared in Vietnamese fine arts.  This achievement never came true without the contribution of artist Victor Tardieu, who founfed and managed the  Indochina Fine Arts College. The conscientious artist, who  was deticated to Vietnamese culture, was born in 1867 and died  in  1937.  In  spite of many difficulties ( at that time, under the colonialism, it was hard to establish afine  art college in such a colonialized country ),  he struggled for the existence of the college with all his will, patience, and prestige ( he won ” Priz d’ Indochine”). This has been considered as a great contribution  to Vietnamese fine arts. A mong the professors of the College at that time, J. inguimberty was the one who encouraged his students in the research of lacquer paintings. Beside oil (on  canvas)  and silk paintings , he and his student such as Nguyen Gia Tri, Pham Hau, Nguyen Do Cung, Tran Van Can, To Ngoc Van, and so on were successful in the improvement of lacquer techniques so as to bring this material into paintings.  Many talented artists were trained in this College. After graduation, those artists successively organized many national and international painting exhibitions:  in  Vincennes – Paris in 1931, in Rome in 1932, in Milan and Naples in 1934, in Brussels in 1935, and in San Francisco in 1937. Especially in 1942, the first lacquer painting exhibition of artist Nguyen Van Ty  was at Khai Tri Tien Duc Assocciation in HaNoi. At  the same time, in the South of Vietnam, specialized lacquer schoos were founded in Thu Dau Mot (Binh Duong) . Other private lacquer studios were also operated under the instruction of  artists from Hanoi. Thanks to these, Vietnamese lacquer has obtained flourishing achievements (with famous artists such as Nguyen Gia Tri, Tran Ha…some already passed away, others still created with lacquer).

Lacquer is a locally available material, it is one kind of resin extracted from a species of tree growing in mountainous areas in the North of Vietnam (this  particular species can only be found in mountainous areas of the South East Asian countries). Resin collectors are usually local people, who get used to this kind of allergic material. They have to sat out for resin extracting early in the morning, otherwise the resin will be darkened under sunlight. Resin is extracted by means of  bamboo tubes  or shells attached to tree trunks. After being filtered, it will be contained in wooden containers or terra – cotta bowls; when the resin has become condensed, it will be separately divided into layers: first, second, or third class. The resin surface is always covered with a thin and non – absorbent coat of paper to keep it always from direct contact with air, otherwise the resin will be “burnt – off” and make the surface shrinking because of drying off to the bottom. The resin is a creamy white in raw form and extremely poisonous solution with strong smell. Anyone, who is not familiar to this substance, will feel itchy and may acquire scabies when touches the resin. When the resin gets dried, it becomes elastic and durable. It can sustain any kind of weather and chemical effects (lacquer  items founded in the ships of Nguyen Anh, with sunk in Ganh Hao river (U Minh – Ca Mau) when escaping from the attacks of Tay Son troops, were still in perfect condition even though those were affected by salt water  for more than a hundred year. Before, lacquer resin was exported to Japan and Western European countries (the French use the kind of resin to cover ship’s bottom).

Raw paint is produced for drawing in two kinds: red – brown and black

a. Red – Brown paint: is used for mixing colors and covering figures in a painting; therefore, it must be transparent. In order to ” stir up” red – brown paint, it is necessary to select the first – class resin, contain it in a terra – cotta basin, add up some pine resin and stir up the mixture with a chunk of wood in many days. After evaporation, the paint surface becomes limpid and viscous. An experienced paint maker will know when to stop stirring if the paint is already “ripe”

b. Black paint: is used to replace black colors. To ” stir” black paint, people contain it in  cast – iron pan, mix it up with pine resin and stir the mixture with an iron stick. Due to contact with iron, the paint is affected by ferric oxide and turns pitch black.

c. Drawing color: the three basic colors   of lacquer paintings are black, red, and brow. To have lighter colors, people usually laminate pure gold or silver into fragments or crush them into powder to cover the painting. To have light white or five primary colors, people use eggshell or mother – of – pearl laying. Also, red – brown paint is mixed with chemical substances like Cadmium Sulfate, Barium Sulface, Chhromic cid, Cinnabar…to have yellow, white, green, and red color respectfully.

Lacquer can be used to draw on skin, metal, pottery, but wood is the most popular surface for lacquer painting.

In order to make a handicraft work or create a fine – art painting, every artist has to grasp basic techniques (in this article, we onlymention some general steps for the fultillment of a lacquer painting).. A lacquer painting can be completed through three different techniques: engraving in low relief, bas relief, and polished lacquer.

Before drawing, the “fond” must be carefully polished. Available drawing patterns are arranged and “reproduced” down to the ” fond” surface. There is a particular set of steel and sharp instruments with different shapes and sizes. How the artist uses the palette knife depends on his own personal intuition so that he can express separate lines on the surface of lacquer. The portraying lines on the painting are expressed according to specific themes; personality, flowers – birds, grass – in sects so as to signify the  separate” lines. On “separating”, the artist’s hand should perform no hesitation; the more precise performance is made, the more excellent artist is. This technique requires much experience from the artist, so as to have unity of style (unite de style)

Few colors are used in lacquer painting; therefore when completing drawing, people cover the painting with a thin layer of ciluor, gold or silver powder, then polish the painting.

Lacquer is mixed up with color powder according to some specific techniques to cover the painting. At present, bas – relief lacquer is presented a new perspective, with is different from the meticulously polished style. In this technique, light is the main element, with appears over flowing thanks to pure gold and silver. To do this, palette knife or paintbrush is preferably used, one coat of paint is covered few days after another one. Inlaying eggshell or mother – of – pearl are also used depending on the techniques of each person, style is unlimited, technique goes with spirit as though it escapes from the border of traditional lacquer techniques. Actually, to obtain this technique, the artisan needs to have a profound knowledge about lacquer.

This is a normal but prevailing technique at present. Following  the figures on the available pattern, the artist little by little brings colors into his painting. Also, the artist should absorb the spirit of the painting, since colors on drawing are different from color of the finished painting. Drawing lines or inlaid gold hidden behind the red – brown color really express a mysterious feeling that allures viewers. Creation on lacquer paintings requires patience. Lacquer technique depends on experience and typical style of each artist. When the painting is completed people cover it with the last coat of red – brown lacquer.

Lacquer paintings are kept in closed rooms with temperate humidity to prevent dirt and make painting get dried more easily. After being kept from 2 to 6 months, lacquer paintings will be taken out and pumiced. This is the most interesting phase to lacquer artists. Also, the artist should know how to “view” and stop in time so as to acquire many spectacular and original colors. Images will gradually come to sight. The lacquer painting will be polished a few weeks after, when lacquer surface is completely dried. Then the artist uses a mixture of charcoal powder and water to steadily cover the surface of the lacquer painting. He will rub the painting surface as long as it turns shining. The painting will be rubbed for the last time with cinnabar powder.

We hope that, thanks to available material and efforts of artists, Vietnamese lacquer will go further.